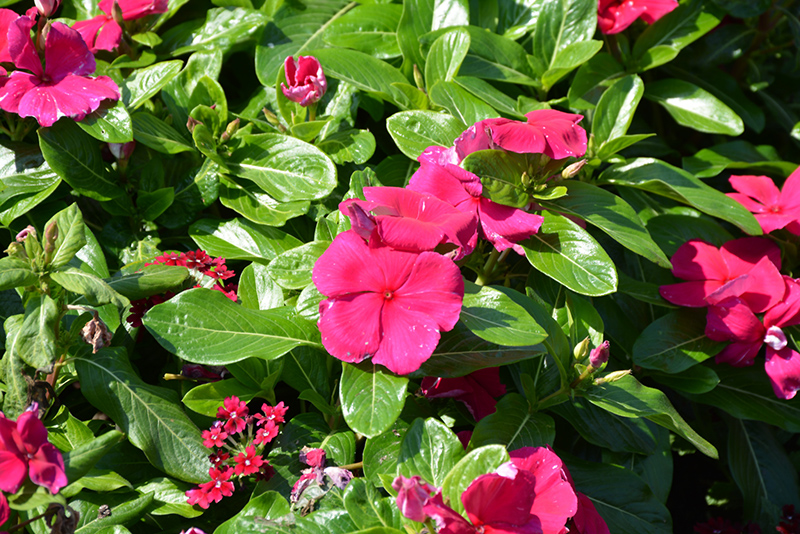 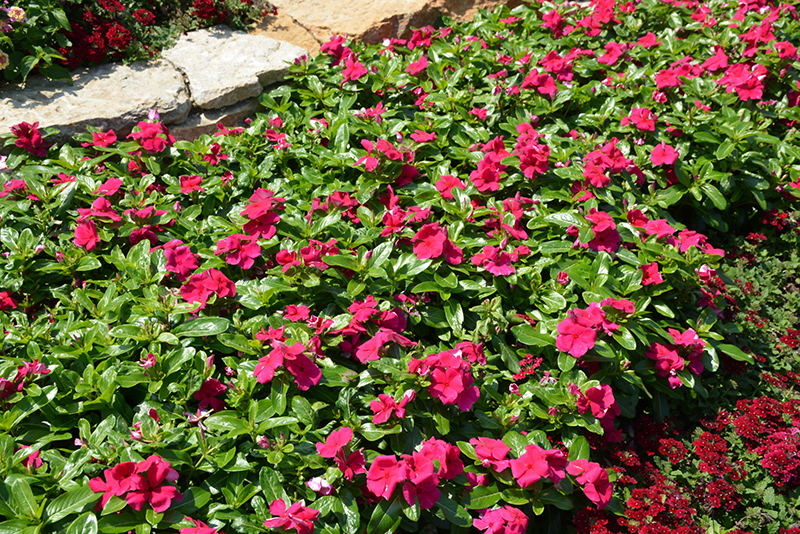 Cora® Cascade Magenta Vinca features showy fuchsia star-shaped flowers at the ends of the stems from late spring to mid fall. Its glossy oval leaves remain green in color throughout the year.

Cora® Cascade Magenta Vinca is a dense herbaceous evergreen perennial with a trailing habit of growth, eventually spilling over the edges of hanging baskets and containers. Its medium texture blends into the garden, but can always be balanced by a couple of finer or coarser plants for an effective composition.

This plant will require occasional maintenance and upkeep, and should not require much pruning, except when necessary, such as to remove dieback. It is a good choice for attracting butterflies to your yard, but is not particularly attractive to deer who tend to leave it alone in favor of tastier treats. It has no significant negative characteristics.

Cora® Cascade Magenta Vinca will grow to be about 14 inches tall at maturity, with a spread of 24 inches. Its foliage tends to remain dense right to the ground, not requiring facer plants in front. It grows at a fast rate, and under ideal conditions can be expected to live for approximately 5 years. As an evegreen perennial, this plant will typically keep its form and foliage year-round.

This plant does best in full sun to partial shade. It does best in average to evenly moist conditions, but will not tolerate standing water. It is not particular as to soil type or pH. It is highly tolerant of urban pollution and will even thrive in inner city environments. This is a selected variety of a species not originally from North America, and parts of it are known to be toxic to humans and animals, so care should be exercised in planting it around children and pets. It can be propagated by cuttings; however, as a cultivated variety, be aware that it may be subject to certain restrictions or prohibitions on propagation.

Cora® Cascade Magenta Vinca is a fine choice for the garden, but it is also a good selection for planting in outdoor containers and hanging baskets. Because of its trailing habit of growth, it is ideally suited for use as a 'spiller' in the 'spiller-thriller-filler' container combination; plant it near the edges where it can spill gracefully over the pot. Note that when growing plants in outdoor containers and baskets, they may require more frequent waterings than they would in the yard or garden.