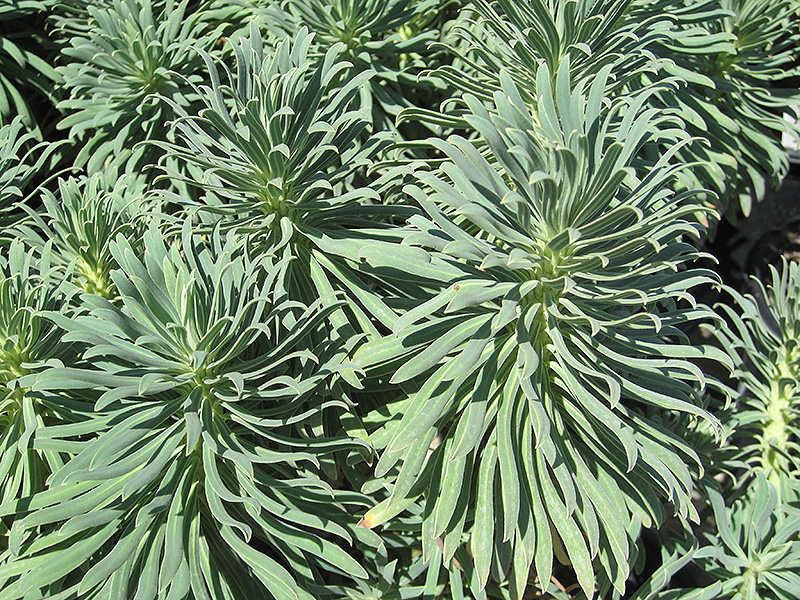 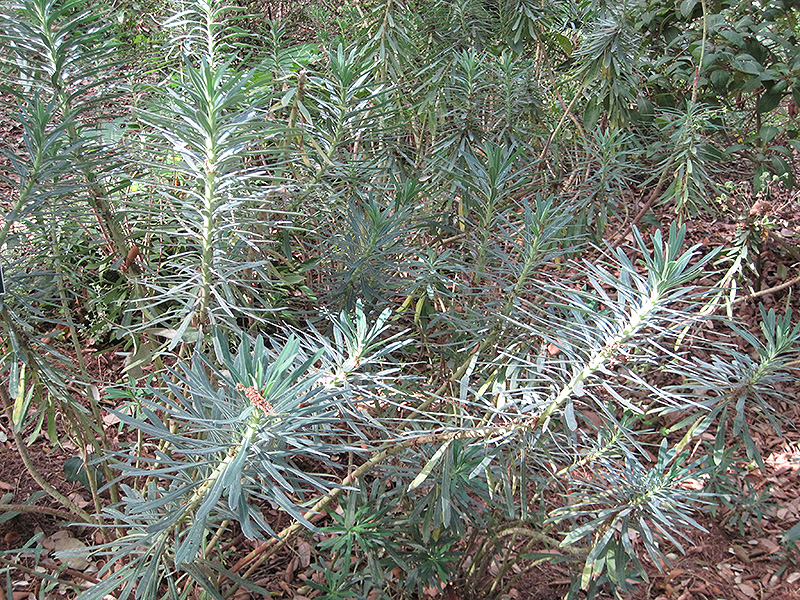 An attractive, bold plant for a sunny border; narrow blue-green foliage arranged symetrically will blush with red hues in fall and winter; flower bracts are massed and showy atop the stems; adds a truly exotic dimension to the garden

Wulfenii Mediterranean Spurge is primarily valued in the landscape or garden for its ornamental upright and spreading habit of growth. It has masses of beautiful clusters of red flowers with chartreuse bracts held atop the stems from late winter to mid spring, which are most effective when planted in groupings. Its attractive narrow leaves are powder blue in color. The foliage often turns crimson in fall.

Wulfenii Mediterranean Spurge is an herbaceous evergreen perennial with an upright spreading habit of growth. Its medium texture blends into the garden, but can always be balanced by a couple of finer or coarser plants for an effective composition.

This is a relatively low maintenance plant, and should only be pruned after flowering to avoid removing any of the current season's flowers. Deer don't particularly care for this plant and will usually leave it alone in favor of tastier treats. It has no significant negative characteristics.

Wulfenii Mediterranean Spurge is recommended for the following landscape applications;

Wulfenii Mediterranean Spurge will grow to be about 4 feet tall at maturity extending to 5 feet tall with the flowers, with a spread of 5 feet. It has a low canopy with a typical clearance of 1 foot from the ground. It grows at a medium rate, and under ideal conditions can be expected to live for approximately 8 years. As an evegreen perennial, this plant will typically keep its form and foliage year-round.

This plant should only be grown in full sunlight. It prefers dry to average moisture levels with very well-drained soil, and will often die in standing water. It is considered to be drought-tolerant, and thus makes an ideal choice for a low-water garden or xeriscape application. It is not particular as to soil pH, but grows best in sandy soils. It is highly tolerant of urban pollution and will even thrive in inner city environments. This is a selected variety of a species not originally from North America, and parts of it are known to be toxic to humans and animals, so care should be exercised in planting it around children and pets. It can be propagated by cuttings; however, as a cultivated variety, be aware that it may be subject to certain restrictions or prohibitions on propagation.