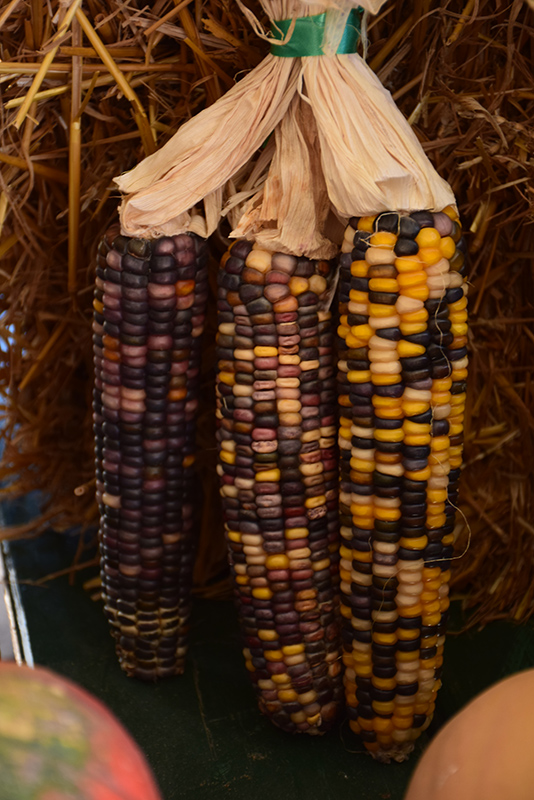 Mainly grown for its esthetic appeal, this variety is a must have in summer gardens and containers; tall sturdy stalks produce ears of corn full of multicolored kernels; beautiful added to fall and harvest decoration

Wilma's Pride Ornamental Corn is an annual vegetable plant that is typically grown for its edible qualities. It produces cobs of burgundy long kernels with gold variegation which are harvested from late summer to mid fall. The kernels will often fade to creamy white over time. The kernels have a bland taste.

The kernels are most often used in the following ways:

Wilma's Pride Ornamental Corn will grow to be about 5 feet tall at maturity, with a spread of 18 inches. When planted in rows, individual plants should be spaced approximately 18 inches apart. This fast-growing vegetable plant is an annual, which means that it will grow for one season in your garden and then die after producing a crop.

This plant is typically grown in a designated vegetable garden. It does best in full sun to partial shade. It prefers to grow in average to moist conditions, and shouldn't be allowed to dry out. It is not particular as to soil type or pH. It is somewhat tolerant of urban pollution. This is a selection of a native North American species.

Wilma's Pride Ornamental Corn is a good choice for the vegetable garden, but it is also well-suited for use in outdoor pots and containers. Because of its height, it is often used as a 'thriller' in the 'spiller-thriller-filler' container combination; plant it near the center of the pot, surrounded by smaller plants and those that spill over the edges. It is even sizeable enough that it can be grown alone in a suitable container. Note that when growing plants in outdoor containers and baskets, they may require more frequent waterings than they would in the yard or garden.