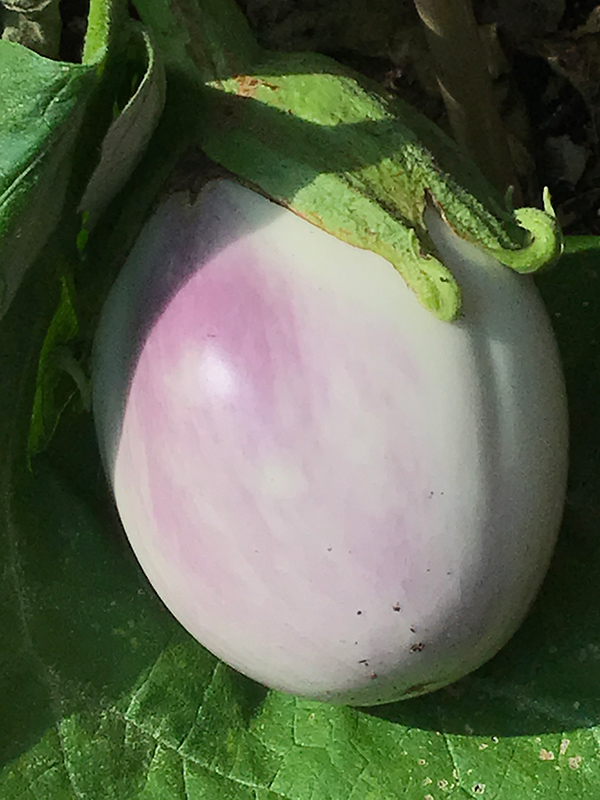 A superb vigorous heirloom variety perfect for large containers, balconies and raised beds; producing large and round white eggplants with blushes and streaks of lavender; firm and mild, delicious stuffed, baked, grilled or made into dips

Rotonda Bianca Sfumata Di Rosa Eggplant is an annual vegetable plant that is typically grown for its edible qualities, although it does have ornamental merits as well. It produces large creamy white round eggplants (which are technically 'berries') with a lavender blush and creamy white flesh which are typically harvested when mature. The eggplants have a mild taste and a firm texture.

The eggplants are most often used in the following ways:

Rotonda Bianca Sfumata Di Rosa Eggplant will grow to be about 4 feet tall at maturity, with a spread of 24 inches. This fast-growing vegetable plant is an annual, which means that it will grow for one season in your garden and then die after producing a crop.

This plant can be integrated into a landscape or flower garden by creative gardeners, but is usually grown in a designated vegetable garden. It should only be grown in full sunlight. It does best in average to evenly moist conditions, but will not tolerate standing water. It is not particular as to soil pH, but grows best in rich soils. It is somewhat tolerant of urban pollution. Consider applying a thick mulch around the root zone over the growing season to conserve soil moisture. This is a selected variety of a species not originally from North America, and it is considered by many to be an heirloom variety.

Rotonda Bianca Sfumata Di Rosa Eggplant is a good choice for the vegetable garden, but it is also well-suited for use in outdoor pots and containers. With its upright habit of growth, it is best suited for use as a 'thriller' in the 'spiller-thriller-filler' container combination; plant it near the center of the pot, surrounded by smaller plants and those that spill over the edges. It is even sizeable enough that it can be grown alone in a suitable container. Note that when growing plants in outdoor containers and baskets, they may require more frequent waterings than they would in the yard or garden.