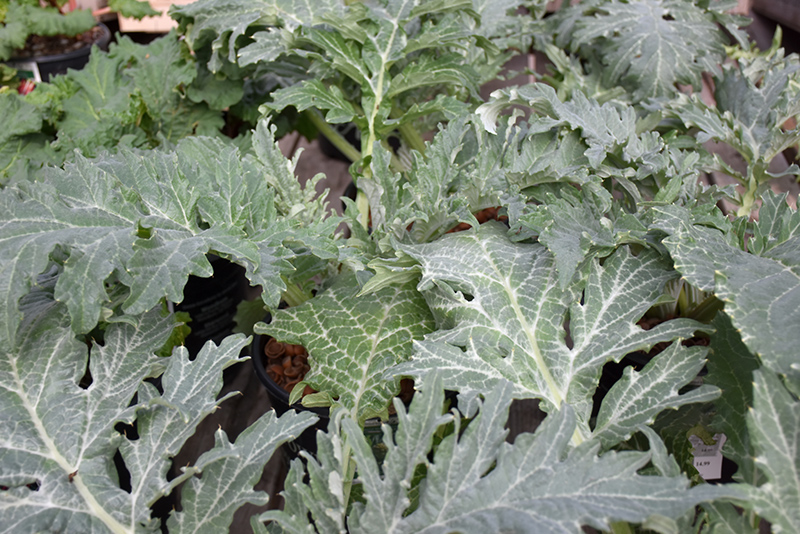 Splendid grey green, spiny foliage is delightful in gardens and patio containers; high yields of flower buds are cultivated and harvested as a vegetable; sweet and mild flavor; very slow to open when mature

Imperial Star Artichoke is a perennial vegetable plant that is typically grown for its edible qualities, although it does have ornamental merits as well. It produces grayish green round flowers with creamy white flesh which are harvested from early to mid summer. The flowers have a distinctive taste with a fleshy texture and a sweet fragrance.

The flowers are most often used in the following ways:

Imperial Star Artichoke will grow to be about 4 feet tall at maturity, with a spread of 4 feet. When planted in rows, individual plants should be spaced approximately 3 feet apart. It grows at a medium rate, and under ideal conditions can be expected to live for approximately 5 years. As an herbaceous perennial, this plant will usually die back to the crown each winter, and will regrow from the base each spring. Be careful not to disturb the crown in late winter when it may not be readily seen! This is a self-pollinating variety, so it doesn't require a second plant nearby to set fruit.

This plant is quite ornamental as well as edible, and is as much at home in a landscape or flower garden as it is in a designated vegetable garden. It should only be grown in full sunlight. It does best in average to evenly moist conditions, but will not tolerate standing water. It is not particular as to soil pH, but grows best in rich soils. It is highly tolerant of urban pollution and will even thrive in inner city environments, and will benefit from being planted in a relatively sheltered location. Consider applying a thick mulch around the root zone in winter to protect it in exposed locations or colder microclimates. This is a selected variety of a species not originally from North America.

Imperial Star Artichoke is a good choice for the vegetable garden, but it is also well-suited for use in outdoor pots and containers. With its upright habit of growth, it is best suited for use as a 'thriller' in the 'spiller-thriller-filler' container combination; plant it near the center of the pot, surrounded by smaller plants and those that spill over the edges. It is even sizeable enough that it can be grown alone in a suitable container. Note that when growing plants in outdoor containers and baskets, they may require more frequent waterings than they would in the yard or garden.