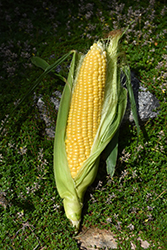 A beautiful variety that produces golden kernels on 6 inch long cobs; a fast growing choice, producing an abundance of ears; plant in rows of 4 or as natural screening; sweet and tender kernels, great for freezing, canning or eating right off the cob

Early Golden Bantam Corn is an annual vegetable plant that is commonly grown for its edible qualities, although it does have ornamental merits as well. It produces small cobs of gold long kernels which are harvested from mid summer to early fall. The kernels have a sweet taste and a crisp texture.

The kernels are most often used in the following ways:

Early Golden Bantam Corn will grow to be about 5 feet tall at maturity, with a spread of 12 inches. When planted in rows, individual plants should be spaced approximately 12 inches apart. This fast-growing vegetable plant is an annual, which means that it will grow for one season in your garden and then die after producing a crop. Because of its relatively short time to maturity, it lends itself to a series of successive plantings each staggered by a week or two; this will prolong the effective harvest period. This is a self-pollinating variety, so it doesn't require a second plant nearby to set fruit.

This plant can be integrated into a landscape or flower garden by creative gardeners, but is usually grown in a designated vegetable garden. It should only be grown in full sunlight. It does best in average to evenly moist conditions, but will not tolerate standing water. It is not particular as to soil pH, but grows best in rich soils. It is somewhat tolerant of urban pollution. This is a selected variety of a species not originally from North America, and it is considered by many to be an heirloom variety.