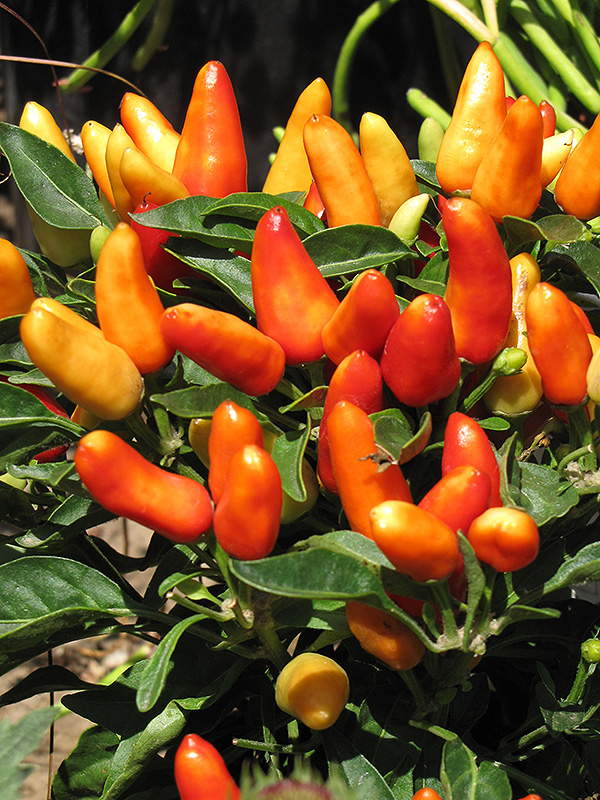 A beautiful ornamental pepper with upward facing, colorful fruits that emerge green and turn to deep orange when mature; heat and sun loving selection is perfect for containers and borders; fruit is edible but not recommended

Karneval Deep Orange Ornamental Pepper is primarily grown for its highly ornamental fruit. The fruits are showy light green peppers which fade to orange over time, which are carried in abundance from early summer to early fall. It features subtle white star-shaped flowers along the stems from late spring to mid summer. Its pointy leaves remain dark green in color throughout the season.

This plant is primarily grown as an ornamental, but it's also valued for its edible qualities. The small oblong fiery peppers are most often used in the following ways:

Karneval Deep Orange Ornamental Pepper is an herbaceous annual with an upright spreading habit of growth. Its medium texture blends into the garden, but can always be balanced by a couple of finer or coarser plants for an effective composition.

Karneval Deep Orange Ornamental Pepper will grow to be about 12 inches tall at maturity, with a spread of 20 inches. This vegetable plant is an annual, which means that it will grow for one season in your garden and then die after producing a crop.

This plant does best in full sun to partial shade. It is very adaptable to both dry and moist growing conditions, but will not tolerate any standing water. It is not particular as to soil pH, but grows best in rich soils. It is somewhat tolerant of urban pollution. This is a selected variety of a species not originally from North America. It can be propagated by cuttings; however, as a cultivated variety, be aware that it may be subject to certain restrictions or prohibitions on propagation.

Karneval Deep Orange Ornamental Pepper is a fine choice for the garden, but it is also a good selection for planting in outdoor containers and hanging baskets. It is often used as a 'filler' in the 'spiller-thriller-filler' container combination, providing a mass of flowers against which the larger thriller plants stand out. Note that when growing plants in outdoor containers and baskets, they may require more frequent waterings than they would in the yard or garden.