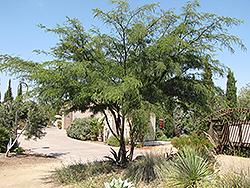 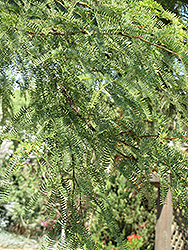 Thornless Chilean Mesquite has attractive green foliage throughout the season. The small narrow pinnately compound leaves are highly ornamental but do not develop any appreciable fall color. It is draped in stunning clusters of yellow catkins along the branches in mid spring. The fruits are showy tan pods displayed from early summer to early fall.

Thornless Chilean Mesquite is a dense multi-stemmed deciduous tree with a more or less rounded form. Its relatively fine texture sets it apart from other landscape plants with less refined foliage.

This tree will require occasional maintenance and upkeep, and should only be pruned after flowering to avoid removing any of the current season's flowers. It is a good choice for attracting birds to your yard. It has no significant negative characteristics.

Thornless Chilean Mesquite is recommended for the following landscape applications;

Thornless Chilean Mesquite will grow to be about 25 feet tall at maturity, with a spread of 25 feet. It has a low canopy with a typical clearance of 4 feet from the ground, and is suitable for planting under power lines. It grows at a fast rate, and under ideal conditions can be expected to live for 60 years or more.

This tree should only be grown in full sunlight. It prefers dry to average moisture levels with very well-drained soil, and will often die in standing water. It is considered to be drought-tolerant, and thus makes an ideal choice for xeriscaping or the moisture-conserving landscape. It is not particular as to soil type or pH. It is highly tolerant of urban pollution and will even thrive in inner city environments. This is a selected variety of a species not originally from North America.; however, as a cultivated variety, be aware that it may be subject to certain restrictions or prohibitions on propagation.