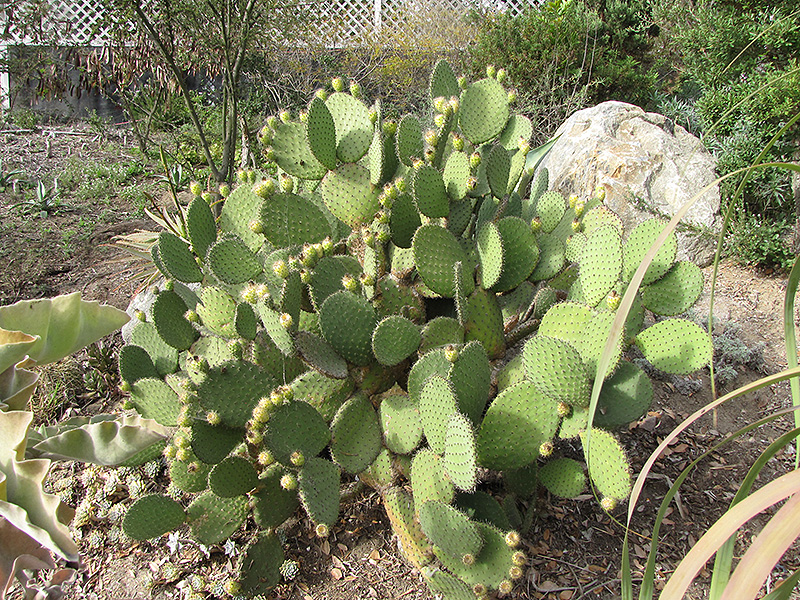 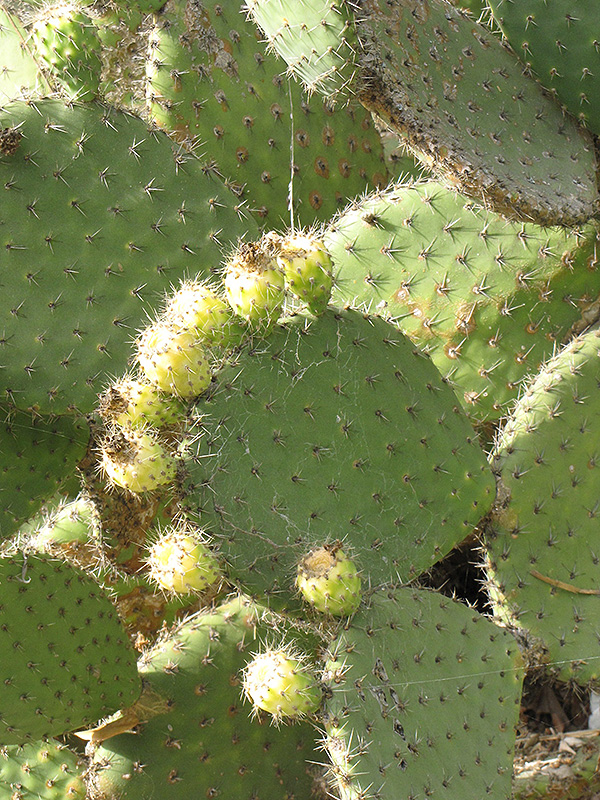 Barbary Fig is a member of the cactus family, which are grown primarily for their characteristic shapes, their interesting features and textures, and their high tolerance for hot, dry growing environments. As an 'opuntiad' type of cactus, it doesn't actually have leaves, but rather modified succulent stems that comprise the bulk of the plant, and which are designed to retain water for long periods of time. This particular cactus is valued for its upright and spreading habit of growth on a plant consisting of spiny grayish green segmented pads that form 'branches' which spread out from a central base. This plant has yellow cup-shaped flowers with buttery yellow eyes at the ends of the branches in mid spring, which are interesting on close inspection. It features an abundance of magnificent red berries from mid summer to mid fall, which fade to purple over time.

This plant is primarily grown as an ornamental, but it's also valued for its edible qualities. The oblong sweet plant is most often used in the following ways:

Barbary Fig is a large succulent evergreen plant with an upright spreading habit of growth. It commonly grows as a shrub-like plant with multiple 'branches' and stems. As a type of cactus, it has no true foliage; the body of the plant is wholly comprised of a linked series of spiny grayish green pads which are connected together to form the branches of the plant. With age, this plant will eventually develop a woody khaki (brownish-green) 'trunk' at its base.

This shrub will require occasional maintenance and upkeep, and should never be pruned except to remove any dieback, as it tends not to take pruning well. Stray segments or shoots can be carefully removed or thinned to control the overall form and spread of the plant. Deer don't particularly care for this plant and will usually leave it alone in favor of tastier treats. Gardeners should be aware of the following characteristic(s) that may warrant special consideration;

Barbary Fig is recommended for the following landscape applications;

Barbary Fig will grow to be about 15 feet tall at maturity, with a spread of 15 feet. It has a low canopy, and is suitable for planting under power lines. It grows at a medium rate, and under ideal conditions can be expected to live for approximately 30 years.

This plant should only be grown in full sunlight. It prefers dry to average moisture levels with very well-drained soil, and will often die in standing water. It is considered to be drought-tolerant, and thus makes an ideal choice for xeriscaping or the moisture-conserving landscape. Like most succulents and cacti, this plant prefers to grow in poor soils and should therefore never be fertilized. It is not particular as to soil pH, but grows best in sandy soils. It is quite intolerant of urban pollution, therefore inner city or urban streetside plantings are best avoided. This species is not originally from North America. It can be propagated by division.

Barbary Fig makes a fine choice for the outdoor landscape, but it is also well-suited for use in outdoor pots and containers. Its large size and upright habit of growth lend it for use as a solitary accent, or in a composition surrounded by smaller plants around the base and those that spill over the edges. It is even sizeable enough that it can be grown alone in a suitable container. Note that when grown in a container, it may not perform exactly as indicated on the tag - this is to be expected. Also note that when growing plants in outdoor containers and baskets, they may require more frequent waterings than they would in the yard or garden.